When my son was little, he had a book I loved. It has a lot to do with assuming love. 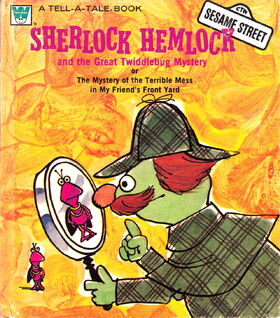 I just looked it up to give you the official title, which was Sherlock Hemlock and the Great Twiddlebug Mystery: or The Mystery of the Terrible Mess in My Friend’s Front Yard. Sherlock Hemlock, a Muppet detective, tried to deduce what had left behind birthday candles, crumpled wrapping paper, paper hats, and more in the front yard.
Little Betty Lou thought maybe a birthday party.
Sherlock Hemlock’s answer? Twiddlebugs. Everywhere he looked for evidence of twiddlebugs, he found some.
When we try to explain the unexpected—who would want to explain the expected?—we have to start somewhere. Most of us start in some rather predictable, if misguided, ways.
We might ask, “What would make my loving wife complain right now that I never do anything for her?” But we don’t. Instead, we think, “I don’t know why she married me if she thinks I am such a screw-up. Maybe that rich jerk she was dating before me dumped her and I just came along at the right moment. All she does is complain, about my driving, about household chores, about schedules. I make a living. I take her out to eat. I do the taxes. But I am nothing to her. She despises me.”
All we see are signs of more twiddlebugs, instead of a woman at the end of her rope, hurrying through some huge project with too little time left. Without a big, red circle on an oversized calendar, our obsession with those twiddlebugs keeps us from remembering why she’s overwhelmed today.
We might ask, “Have I forgotten anything he said that might explain why he is late coming home tonight when we need to leave here by 7:30?” Instead, we ask, “Is he cheating on me? Is this related to his claim he had to brush before kissing me this morning? What did he charge on last week’s business trip? Should I use his password to read his email? I’ll just put his dinner in the refrigerator. No point waiting for him tonight!”
We see twiddlebugs when we look for twiddlebugs. When we put down the magnifying glass and take a look at the whole picture—when we Assume Love—we see more plausible explanations for what happens in our marriages.
Assume Love and look for an explanation that fits with it. Twiddlebug invasions are a lot rarer than love.

This site uses Akismet to reduce spam. Learn how your comment data is processed.

Assume Love in Your Inbox!

Angry at Your Inconsiderate Husband or Wife?

Avoid Pretending to Feel Loved When You Do Not

Husbands Whose Driving Frightens their Wives