Today, I went to the cemetery to plant some flowers on the grave of my first husband. This would have been his 60th birthday, except he died 25 years ago. While I was there, I buried my fears. I put them in the dirt under some petunias and left them there in New Jersey. 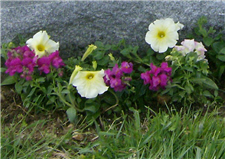 As I dug out the weeds and readied the soil for the beautiful pale yellow and dark red-purple flowers I had brought with me, I recalled how fearful I was in the months before he died. Everything seemed to be going wrong back then. I had been afraid then, and I have been afraid again more recently.
Digging in the soil on this sunny spring day, I realized I have only ever been afraid of one thing: that whatever I am not enjoying right now will get worse. That’s it. That’s fear: the belief that things might get worse.

That’s fear: the belief that things might get worse.

I had been so afraid back then of things getting worse that I wanted a divorce, not so much from my husband as from our life together, so it could not get any worse. And then the worst thing I could imagine happened: he died while I was out at work.
This was, of course, not the worst thing that could have happened. It was just orders of magnitude larger than anything I had been fearing. He had died at home, not while leaping from a top floor of a burning World Trade Center tower. No tornado had lifted up the house and left the three of us half-crushed beneath it. No one had shown up to torture us for information we did not have. It was, though, much worse than anything I had been fearing.
Yet once it happened, I got busy rebuilding my life and taking care of our son. I worked harder than I ever had. I took bigger risks than I ever had. I asked for help I had never asked for. I crossed things off my to-do list that I had been sure were mandatory. I did whatever it took to recover.
As I dug in the earth over my first husband’s casket today, I thought of how my current fears that things may get worse were affecting my second marriage. And I decided not to wait for the local nuclear power plant to leak or the gas pipeline to blow before I stop worrying and start doing the hard work of building the life I want around my current circumstances.
I planted my fear of things getting worse under the petunias today and stuck snapdragons around them to keep those fears from following me home. And all the way back to Pennsylvania, I felt lighter and stronger and happier. And very, very lucky to be married.

This site uses Akismet to reduce spam. Learn how your comment data is processed.

Assume Love in Your Inbox!

One Last Stand Before Divorce

Should I Stay Married for the Kids?

Falsely Accused by Your Spouse?