I Shouldn't Have To, But I Can

There were crumbs on the kitchen counter today as I prepared to make my lunch. Even though we no longer live in a place where crumbs lead to insects and rodents, it irked me.

Why should I have to work around your crumbs? Why should I need to clean up after you to make my lunch in peace?

And that's when I recalled how I wrecked my first marriage. And I remembered that I shouldn't have to clean up those crumbs, but I can. And when I do, I spend 3 seconds on the matter instead of ruminating about it for the next 3 hours, until I get to voice my complaint and ruin our evening together, too.

Instead, I'll get to enjoy whatever way my husband chooses to show his love for me, because he hasn't been scolded. Not bad for a 3-second investment in our marriage.

As I was setting up my Author page on Amazon for Agreed: A Journal to Bring Joy to Any Marriage with Too Many Disagreements, I discovered that all of the articles I wrote for Going Bonkers? magazine (The Self-Help Magazine with a Sense of Humor) are in issues now available in Kindle format.

I thought you might find some of them interesting, as they go into more depth than I can on the blog.

In Going Bonkers? issue 7 is My Spouse Acts Like He [She] Hates Me: When You No Longer Feel Loved. It's the top article on the cover, the title illustrated by Randy Glasbergen, who wrote the cartoon strip The Better Half. You can find it on pages 38 through 40.

You can find my Where's My Old Spouse: When the Person You Married Makes a Drastic Life Change piece on pages 62 through 64 of In Going Bonkers? issue 8.

My article on the tradeoffs in development of Character Strengths, Tradeoffs: Why Your Hardworking Mate is Ungrateful and Other Mysteries of Love is on pages 58 through 62 of Going Bonkers? issue 10.

Finally, in Going Bonkers? issue 12, you can read Spontaneously Boring: When Your Spouse Leaves All the Planning to You on pages 29 through 31.

You'll find lots more in these magazine issues full of upbeat, well-edited and illustrated articles by a variety of fascinating authors. I share that last issue with Wayne Dyer. Going Bonkers? was one of my favorite magazines. I hope you'll take a look at these Kindle editions.

Required disclaimer: As an Amazon Associate, I earn a small commission on Amazon sales through these links.

Patty Has Published Agreed: A Journal

Agreed: A Journal to Bring Joy to Any Marriage with Too Many Disagreements, the first of three Enjoy Being Married Journals, is now available on Amazon.

If you are a regular reader of the Assume Love blog, you know my mantra for enjoying your marriage: 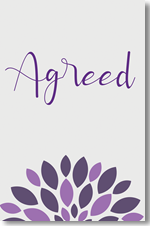 This first journal is designed to help you Find Third Alternatives and stop feeling like your marriage is a conflict zone. The back of every weekly journal page is a worksheet you can use to find your way through any disagreement, big or small, to a Third Alternative both of you like better, or at least as much, as the one you brought to the disagreement. The process is a lot more fun than debating or fighting or bullying to get your way, and it always ends up with both of you getting what makes you happy.

I included lots of real examples, showing you how to use the journal and the worksheets to get what you want while giving your husband or wife the moon and the stars. That's what you hoped marriage would be like, isn't it? It can be.

Please buy a copy of Agreed: A Journal to Bring Joy to Any Marriage with Too Many Disagreements for yourself and one for a friend.

The links above are Amazon Affiliate links that provide a tiny extra payment to help fund this blog. If you prefer to purchase through Amazon Smile, to give that money to your favorite charity, just search for Patty Newbold Agreed once you're logged in there. Indie bookstores do not yet carry Agreed.

Posted by Patty Newbold at 3:16 PM | Permalink | Add a Comment

If you're a wife in the US, what's your legal protection if your husband takes a mistress and spends money to support her? It depends on the state you live in. Some say this is grounds for divorce. Others will grant a divorce only after you two have been separated for a certain period of time. Some say it's grounds for your financial needs to prevail in a divorce. Others say you'll make an equal split of the assets and debts from the time you were married, regardless of his expenditures on a mistress. If you don't want a divorce, the law is no help at all.

It's different in Pakistan. Taking a mistress is grounds for imprisonment. But taking a second wife is legal. Last month, they qualified that option.

On August 26, 2020, the Supreme Court of Pakistan ruled that a man may not take a second wife without the permission of his first wife or an arbitration council. This comes despite the religious rule their government adheres to allows men up to four wives.

To folks who grew up believing in two-person marriages or even one man one woman marriages, this can sound like madness. In today's environment, the rationale that men with more assets ought to take in and care for the women and children unable to support themselves in a patriarchal society seems to make a lot less sense. But we don't easily drop traditions rooted in our religious beliefs.

But which is madder?

There is a penalty for violating this rule. On the day a couple marries, usually in a marriage arranged by their elders, they agree to an amount called the haq mehr, which the husband (who bears a legal responsibility for caring for his wife and children) will be required to pay his wife in the event of a divorce he initiates. They usually agree he'll owe her a much smaller portion (khula) if she initiates a divorce. They might agree he will pay it all at once or over time. The haq mehr may be listed in gold or in real estate or in livestock, so that currency fluctuations don't diminish it. Take another wife without her agreement, even though a second wife is legal, and the entire haq mehr debt becomes due that day.

While I still dislike the fact that their laws are based on sex, I salute Pakistan for coming up with a solution to the ugly problem of a third party to a marriage, a party unwanted by the less financially independent spouse.

Posted by Patty Newbold at 4:00 PM | Permalink | Add a Comment

Patty Newbold is a widow who got it right the second time...